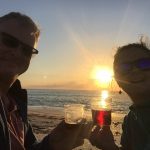 Sun 29/01/17. Sardinia, Spiaggia di Mari Ermi.  Early evening with the sun going down over this spectacular coastline, beach and our home for the night, hopefully. Having just walked back from the Spiaggia after having a lovely sundowner we were met with a guy taking photos of our NiKi, not one but several. Damm, we thought-local council, police or local … END_OF_DOCUMENT_TOKEN_TO_BE_REPLACED 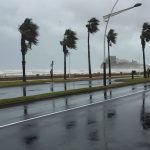 Once upon a time there was a wonderful couple who were travelling around Spain in a lovely Elddis Encore motorhome. But after a year in Spain they decided to venture further afield and so booked themselves on a ferry run by GRIMaldi (there’s a clue in that name!) Lines to an island named Sardinia. They headed up to the port of Barcelona in winds and rains … END_OF_DOCUMENT_TOKEN_TO_BE_REPLACED 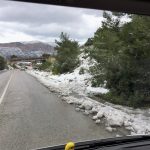 When we arrived in Spain on the 9th January 2016 it was pouring rain and had travelled in a force 8 gale to Santander. Now heading off on our new adventure the 'Long way home' Spain has decided to say farewell with worse weather!   Here is a teaser of the wrap film Elddis have made of our views of a year in Spain. So though Spain has stolen our hearts it can … END_OF_DOCUMENT_TOKEN_TO_BE_REPLACED 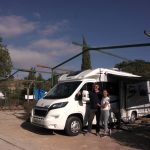 Having just returned from a busy week back in the UK this is a 'filler' to cover that week with normal weekly service being resumed next Monday days after our arrival in Sardinia - stay with us for the last 5 months The motorhomers key to (near) perfect harmony Living in a confined space can be a challenge - never more so when that space is a motorhome.  The dream may … END_OF_DOCUMENT_TOKEN_TO_BE_REPLACED 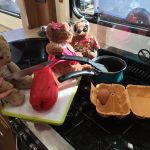 The last 3 months of our journey and as we continue to say time as just flown. Our journey for these last 3 months was heading down from Barcelona towards Murcia after meeting up with friends and then heading and staying south as much as we could for the sunny weather heading over to Seville for November to meet up with more friends. The journey then continued along … END_OF_DOCUMENT_TOKEN_TO_BE_REPLACED