Once upon a time there was a wonderful couple who were travelling around Spain in a lovely Elddis Encore motorhome.

But after a year in Spain they decided to venture further afield and so booked themselves on a ferry run by GRIMaldi (there’s a clue in that name!) Lines to an island named Sardinia. They headed up to the port of Barcelona in winds and rains unknown in Spain, apart from 70% of the rest of 2016. They stocked up on essentials on the way like pizza and pasta, just in case and made sure the toilet was empty and clean. After a chaotic check in and holding wait they all boarded the big ship- Cruise Barcelona and NiKi was parked in a corner with lots of other lorries and vans for him to talk to.

The wonderful couple then had a quick explore of the ship, cabin etc before settling down with a drink and to wave goodbye to their home for a year Spain. But did they…… let’s jump back in time and the events leading up to their ‘departure’.

A lovely ‘admin’ week was spent in the UK visiting family, friends and making sure we remained in the UK health scheme. Oddly not long after we arrived the rain started and then the snow for that week, apparently up till then the weather had been good for the winter. Uhm, seems to be a pattern here. Thankfully for Karen the flights in and out of Gatwick were smooth and we arrived back to Murcia in sunshine which we took advantage of to get some washing done and dried. The winds were beginning to build up and come the next day the rain and wind were lashing it down. Our day of departure was the Wednesday and we both had really hoped to see

Auntie Fran and Stan before we left this region and to say a big thank you to them for all they had done for us. But not to be they are firmly stuck in Ireland due to ear problems for a little while yet. So we headed off on the Wednesday with snow falling on this costa renowned for its sunny, warm climate.  Passing Benidorm the snow was inches deep giving a whole new aspect to the ‘snow-birds’ emigrating to this popular spot to escape the cold in England. We had decided on 2 stops on the way up and our first was Denia to meet up with fellow motor homers we had met on our travels in Spain- Bez and Tez. Owners of a lovely Bailey that has spent more time on the back of a low loader than is norm for a car let alone a motorhome. It was quiz night on site that evening and we entered making a team up with them. Bez and

Tez hold the record for always winning here and in true quiz spirit their winning streak hasn’t always been received well.  However I was still quite surprised at the malice from most other entrants eyes when ‘Those Pesky Things’ won again this time as well- no thanks to me at all I hasten to add. With slightly sore heads we bade our farewells to Bez and Tez heading off again along the coast for one last stop in Spain.

Valencia and its wonderful paella was our draw for lunch on that Thursday as we made our way to Barcelona.  Sorry for repeating but the wind, rain, sleet continued to haunt us all the way up with NiKi being pushed and pulled across the roads. We both dithered as to which route was likely to be better-toll roads or the normal main roads- each had their own merit but we were surprised by the Spanish drivers in these conditions. They drove like mad men almost as if they were thinking we can’t be out in this weather we must rush home. Thankfully we saw no accidents but the journey remained 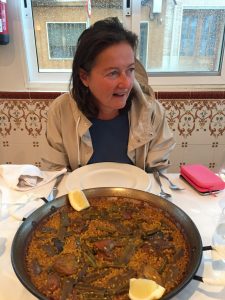 scary as we made it to our lunchtime stop and third visit to El Sequer de Tonica (El Palmer). This is where the rice is grown and the true home of paella. Not a pretty town by any means but this menu del dia despite the weather always shines and lovely people as well. With full bellies we headed off again and both agreed to try and make a push further north so as to be closer to the port for the Friday as the weather showed no signs of abating.  After a near disastrous parking up on site in Pensacola we battened down the hatches, opened a bottle of wine and listened to the wind and rain compete with each other.

Friday- our last day in Spain and with David driving again in the bad conditions we headed off for the last 200k’s. Our hope was with a night time sailing to have a big lunch and our last menu del dia. But somehow our timings went wrong and we hit the Spanish twilight zone for food arriving in Sitges after 4. Sitges despite being Barcelona’s little brother seemed to be obeying Spanish eating rules and not many restaurants were open. One was, but Spanish it was not and our last meal in Spain was Italian and pasta in a lovely newly opened bar called Local. One half of the partnership being from Italy and the other from London. The food and bar were wonderful and we wish them both every success but for us it was quite ironic that pasta was to be our last supper.

And so to the end of the ferry story-come 2am with sleep that was dispersed with intercom announcements continually after midnight in 3 languages the last of each being a sort of English and for the main being that the ship had a lid which we were very grateful of given the weather (we eventually realised that she was saying the ship was delayed) the sailing was cancelled. It took us 2 announcements before we completely understood and then David raced down to this ships reception area in his best pyjamas to see what was happening. In fact nothing was happening apart from disturbing sleep and the fact the ship was going nowhere that night and nor were we. No one was to be dis-embarked until 8 am and we were to be up and ready for then. This wasn’t one of our favourite bed time stories.

We would like to say thank you to GRIM lines for their wonderful organisation with this but we can’t. After driving off the ship and parking in amongst the lorries the office didn’t open till after 12 and the café didn’t open at all.

So there was a lot of very tired, angry and hungry passengers in GRIM lines reception and it was after 2 before we or rather when the police forced us out of the port that we set off for a camp site further down the coast to await an update on our exit from Spain with the next sailing being Tuesday- same place and time but with no signs of the weather changing as of yet.

Is Spain holding us captive, will we ever reach Sardinia and our we the bad weather bunnies??