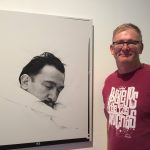 As we hang around the coast north of Barcelona -simply the best and what is. Food wise this area hosts number one restaurant in the world, Culture wise we have Gaudi in Barcelona and now Mr Dali in Figueres for the art world.  Plus some of the most stunning coast line as well. Spain-and motorhoming simply the best in so many ways.......... … END_OF_DOCUMENT_TOKEN_TO_BE_REPLACED 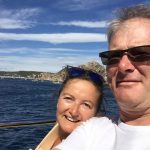 Mon 12/09/16: ‘We don’t like Mondays’ the song goes, but generally I have never minded them, Tuesday always being the ugh day for me. This Monday was one that I will remember certainly for the next 6 weeks while my wrist remains in plaster. Moving on from seeing friends in Barcelona we were on the hunt for a more suitable camp site near to Barcelona for the end of the month … END_OF_DOCUMENT_TOKEN_TO_BE_REPLACED 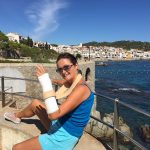 Thank you all for your kind wishes concerning Karens's arm, that after a four hour stretch in the hospital on Tuesday we found had been fractured. She now is in a cast for 5-6 weeks, so David will have to up his game. But Calella de Palaurugell has cheered her up no end, we have had a small series of minor disasters lately, more of them later but in the meantime a big thank … END_OF_DOCUMENT_TOKEN_TO_BE_REPLACED 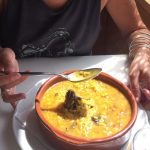 Mon 05/09/16: After our first night sleeping with the doors open (on camp site…such was the heat) we headed early back into Llieda and to the Peugeot garage where we were to get our wing mirror fixed thankfully. Arriving at the allotted time of 11 Allia informed us that the part hadn’t arrived … END_OF_DOCUMENT_TOKEN_TO_BE_REPLACED 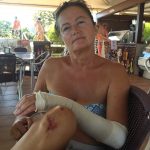 After meeting friends and exploring Barcelona for a few days, we moved on the north of the city to another ASCI campsite. This is much better than the one near the airport we stayed at. But danger lurks even in the loveliest places. As David was parking the van under Karens's expert guidance. Suddenly a shriek and she disappeared from view in what is left of our mirror. … END_OF_DOCUMENT_TOKEN_TO_BE_REPLACED