Tarmacers Required –Applications to  ‘Italy’. This is a full time position that could and will require several years of dedicated resurfacing in fact probably relaying work on the network of so called roads here in Italy. Experience is a must if only to undo the obviously previously inexperienced ‘patch-work’ done on most of the roads. Dedication, patience and absolute lack of fear are a must as it’s unlikely that any of the roads would be closed whilst this work is undertaken, therefore you’ll also have to dice with death that commonly known as Italian drivers. Apply now 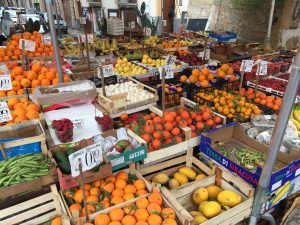 With the wind howling and rain pouring we made our way back to Palermo on Monday 6th Feb. My turn to drive but the wind gusts were so great and roads so bad we both thought it better if David held firmly onto the steering wheel rather than me. Our spot in Palermo was as ever for cities a secure
car park area but it was thankfully reasonably quiet. We could have made the walk into old town Palermo as it was only 3k or so away but the number 107 from outside the door was a better option given the rain haze as we headed for our Street Food tour hosted by 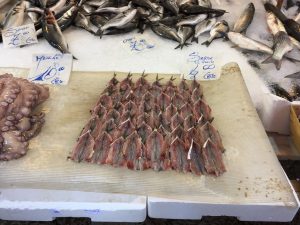 Giorgio. What a wonderful introduction to the street food that makes this city so famous and that hopefully still forms part of their main identity rather than becoming just a tourist item. The market where we started was like all fruit &veg markets, bright breezy fun and cheap and you could really see how the freshness and produce just make for Palermo home cooking. The fish stalls weren’t abundant but enough for choice and competition and it was great watching all the locals just wandering, pricing and making their own pitch to the stallholders before they committed. For us the first tasting was fried fish or veg, so we opted for a mix of filleted sardines and aubergine flowers. 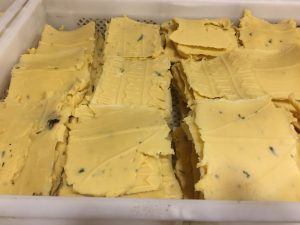 Both were equally delicious and as we wandered further on the tour Giorgio explained that the first principle of street food is that it is fried. It would have been home made elsewhere and then ‘refreshed’ by frying in the market. It would also back in the day have been soft food as teeth weren’t what they are now and so it had to be soft and dare we say gummy.  The next taster was the much renowned Arancini, deep fried rice balls stuffed with ragu and cheese covered with rice and then fried. A meal in a self-made bowl, but for me it was the pane e panelle- chick pea fritters that got my taste buds, delightfully thin crunchy chick pea fritters. Our final delight not to be missed and certainly for us tourists a bit of a dare was the spleen and lung sandwich. 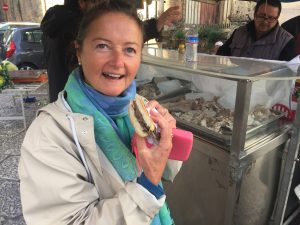 Yum I hear you say, can’t understand why it’s not on Prets menu at home. I shall describe it more to you but would also hasten to say it really wasn’t too bad especially if you eat & like liver. The spleen and lung from a cow are cooked and then very thinly sliced and fried in lard so it’s hot and then placed in a roll.  If you didn’t know any different it really is just like any other flavoursome meat sandwich. We did draw the line at the stall next door where cold cow tongue, jaw, penis and inners were again thinly sliced and served doused in lemon and olive oil- just one step too far on this tour for our bellies. 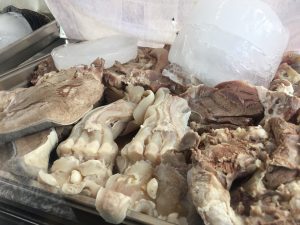 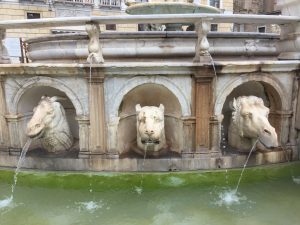 With the tour and wanderings of Palermo done we headed off towards another must for me- Marsala. Marsala is a wonderful sweet some might say sherry like (but not always) wine and it comes from this town and the vines around here. Like most towns Marsala is a mix of old and new, the new here being quite ugly and the old very pretty. However the town could not hold us for more than a visit and after a very nice lunch we headed to Cantine Florio, one of the lead producers of Marsala. A wonderful shop selling not only marsala wine but also other not needed items which indulged our much needed retail therapy
having not purchased anything of note since leaving Spain and not a Decathlon to be seen here as of yet. 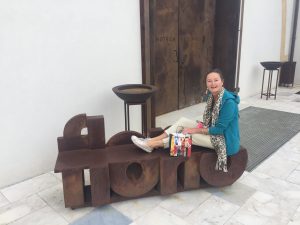 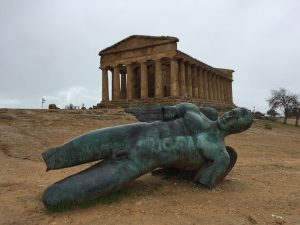 The weather continued to be mixed as you might expect for what is still winter here and this slightly dampened our enthusiasm for Valley of the Temples, being exactly as it says on the tin, an enthralling archaeological site with the most stunning Temple de Concordia which is also what the emblem of Unesco World Heritage body is based on. A wonderful must see place and so much part of world history, do make the trip if you are in Sicily. 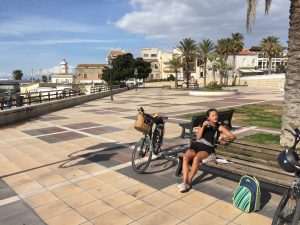 With money slipping through our fingers like water a Lidl shop was made and the makings of in- house dinners for 3 nights purchased before we made for an acclaimed motorhome stop in the Marina de Ragusa. The inland town of Ragusa is one of a series of baroque towns in this south east corner of Sicily. However the marina was far from baroque but very pretty with a lovely seaside atmosphere and what seems to be its own micro climate. Since we have arrived despite storms just inland and rain predicted just further along, Marina de Ragusa has remained sunny and to the point that we have been able to undertake our first 40k cycle since arriving in Italy and also sit outside in our shorts and t-shirts. The latter was of course met with full on horror from the locals to the point that when seeing us they firmly wrap their duvet coats even tighter around them and grab their children just in case we might be infectious in this disregard of the climate, but 20 degrees is t-shirt weather for us northern Europeans. So tonight is our 3rd here and again with rain predicted in our next port of call- the baroque town of Noto for tomorrow we might hit our first record stay in Italy of 4 nights on the trot. 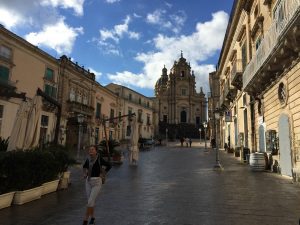 After all ‘baroque’ is soooo last season. 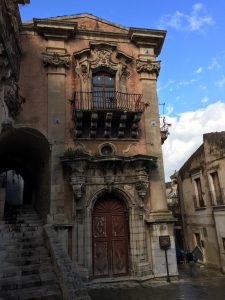 Our Route This Week