So your intrepid Grey Gappers have had a fascinating 48 hours, we fled the mountains a couple of weeks ago due to the cold and snow and despite one 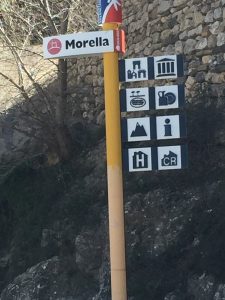 short visit, we stayed on the coast and explored there. But the mountains called us back, and so we headed back inland to the stunning town of Morella, we had been told it was wonderful and even better there is a free Aire for us to stay on.

Well everything about this lovely little town blows you away. The aire is set out to give you a stunning view of the town, a short 20 min walk get you to the main gate. The helpful tourist office (unusual in Spain) gives you maps in any one of 5 languages. We explored the castle which, at 1070m soars above the surrounding countryside. After that watched a stage of a cycle race arrive and off to an excellent lunch. More of which in Karen’s Food Diary later! The town is lit up on Friday, Saturday and Sunday nights which adds to your experience.

the sun. Then this stranger turned up and asked ‘are you David and Karen AKA the Grey Gappers’, fame at last. Well the young stranger was Matt and his partner Jo soon arrived, They have been touring Europe on £10k for over a year, and a real pleasure it was to meet them and hear of their far braver travels than ours, you can check out their website here. They had heard about us through Jason and Julie mutual friends who are full timing around Europe, and have been very helpful to us on our travels. As soon as we had asked them to join us for a drink, Terry and Beverly who we had met in Feb in Cabra showed up.

We had a lovely evening under the stars having a few drinks, comparing notes, Matt and Jo impressing most with their sense of adventure and skills in lasting over a year on 10K while still seeing and experiencing all Europe has to offer. Terry (Better known as TeZZa seemingly) and Beverly explain the travails of the problems they have had with their Bailey Motorhome, to date requiring a replacement toilet, taken away on a low loader to sort out burnt out wring, plus faulty grill and now the wipers don’t work, lucky they are in Spain!  But these all seemed to have not spoiled their adventure and they, Jo and Matt and us love this country and all it offers. We finished up late and the next day I apologised to our neighbours, said farewell to TeZZa and BeZZa and Matt and Jo.

We were heading cross country to Albarracin about 150k due west a journey that took about 5 hours, crossing some of the most beautiful scenery we have so far experienced in Spain.

As we travelled we spotted some smoke on the horizon and as we got closer found a tractor had gone up in flames. The trailer with animals on board they had managed to disconnect but it too was on fire. The farmer was beating the flames with his jacket trying to stop the fire engulfing the
trailer and his livestock.

As we drove by we realised that we could help, being a motorhome there was 100 litres of water on board as we had topped up that morning. So we filled buckets and assisted in dousing the flames on the trailer. Then cooled the metal so he could hook it up to another tractor and get it to safety away from the flames. Still the sadness surveying the damage one tractor lost and the damage to the trailer was substantial, but the livestock were safe and out of danger.

Then there was that strange moment when the farmer shakes our hands nodding fiercely, smiling, speaking Spanish really fast, and despite all our lessons not understanding a word. We still felt good knowing that in an emergency NiKi is also a ‘Fire Engine’ and that afternoon Karen and I were ‘Blue Watch’.