After a few more sad and tearful farewells (mainly on Karen’s part) plus our last UK Indian we headed off to Portsmouth and the 24 hour crossing to Santander stopping en route to weigh Niki and also to say goodbye to Dot or Dorothy as she so liked to be called (Karen’s Mum, in a very bleak cemetery, but with Big Grandad and Big Nanny as we called them, Dots Mum and Dad and also 1 sister Olive). As Karen’s family hale from Portsmouth Karen’s cousin Gary and fiancé Zoe were also going to wave us goodbye but we were also fortunate enough to have 1 more cousin Shaun and girlfriend also waving us off from the shores of England. 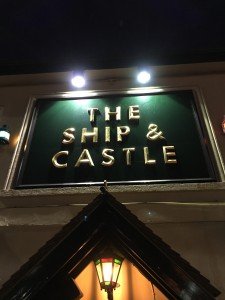 th anked for daughter Claire (find out the reason why Claire is the Holy Grail after the year!!) Karen nearly dropped down there and then on the spot such were the stress levels at that moment- having said goodbye over our chicken dhansak & poppadoms the night before these were the last people we expected to see, but what a joy as a farewell and so we headed off to the Ship and Castle the closest pub to the dock terminal and also a pub with so many memories for the Grant family, many a picture of cousins, uncles and aunts etc with the S&C in the back ground.

For whatever reason the ferry was over an hour late leaving the dock but still Gary and Shaun waited and with the aid of technology i.e apple torch we managed to all wave goodbye as the ferry headed off into the black and bleak yonder to bounce and weave her way across the dreaded Bay of Biscay. Despite the ferry heading off at 8pm the main restaurant still closed at 9pm and so as it being D’s 55th birthday we headed off to posh restaurant to see what was in store for us. The ferry was French owned and therefore that country biased and so we made our choice, but sticking with where we were heading we chose a Spanish red. All were very good and lovely, but please refer to Karen’s food blog for further intensive details. 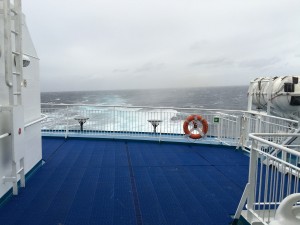 As we headed out past the UK and onto open ocean so the waves, winds etc began to pick up and so we headed to our cabin not cruise standard but perfectly functionally and try to sleep. Whatever the best warnings and predictions were we managed to head into a force 8 gale and over D’s snoring Karen could be heard to say many a time ‘ I don’t like this, if it was a plane I’ll be screaming by now’ which for those of you unfortunate enough to having flown with K will know this to be true. Morning came and with still much weaving breakfast was had and the day ahead became slow to gain speed such are the fortunes of a ferry crossing and high winds. We eventually thankfully made it into Santander 1.5 hours later than we should have due to the force 8 winds and after very valuable advice from another motorhomer now a ‘tugger’ we changed course for our first stop and heading for the Elephant park just east of Santander rather than heading thorough the Pisco d’europa mountains and with a shorter drive in the RAIN we also managed at 10pm to get some food as well. Then we headed up for our first night in NiKi and after a final whiskey we made everything up and hit the very comfortable fixed bed- a good choice for us long termers. The rain continued throughout the night but such was the exhaustion, tiredness, alcohol and drugs we both managed a decent nights sleep and awoke the next morning to find ourselves surrounded by many of our fellow ferry motorhomers.

With more good advice from these more experienced travelers we headed off to Salamanca on the way to our first proper stop of Cadiz and Spanish school. Karen took to the wheel for this part and after again going off piste to find diesel 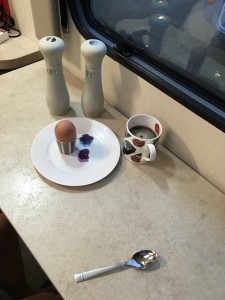 and food (for David, Karen having had her usual boiled egg). Mistakes began to unfold as the roundabouts started to head in to smaller villages and narrow roads including a gasp moment when we were heading for a tunnel that NiKi was too big for and so we headed as you do down a residents only small track and into the back roads off a small mountain, Heads, hearts and tempers were kept and we negotiated our way out and on to the petrol station that yielded both diesel and bocadillos – both cheap and excellent. 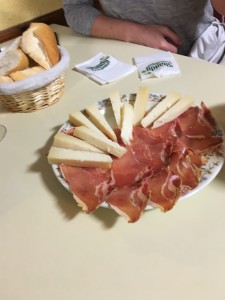 With still the rain and the wind giving it’s all through the mountains we still managed to make good time and to arrive at our next aire. But given this was a Domingo and outside the main town was it a good time- was it for us ex townies to be another of those ‘Sorry, it’s past 2 and we don’t serve food now’ moments. With D heading through
the door who was likely to say No, even though the main restaurant was closing we managed to get ourselves understood and got some tapas and a few glasses of beer and vino. The locals eventually stopped staring at us especially as on the stare or dirty looks front Karen is a master and we headed back to a more slightly industrial aire (on a housing estate)than our first and bedded in for the night and this is where with a glass of vino tinto you leave us until